Born in 1967, Lynn Bennett-Mackenzie is an established artist living and working in Gairloch, NW Scotland. Brought up in remote rural areas of the Highlands of Scotland, Lynn studied at Gray’s School of Art, Aberdeen, graduating in 1990.

She enjoys creating in a variety of media and exploring new methods of working.  She has exhibited widely and taken part in several community and international projects including The Big Picture, Wild Wood , Landfill art,  an International Art Symposium in Russia and is currently collaborating with an Indian artist to create Ceangal, a series of international artist residencies in the NW Highlands. A major project in connection with this was a schools participatory project supported by SNH at Beinn Eighe Nature reserve in collaboration with Indian artist, Somu Desai.  She also travelled to India in January 2012 to further develop Ceangal.

In her painting and drawing works she successfully expresses the emotion of the often isolating atmosphere of the Highlands.

She has also worked out of the box, most recently completing an installation work at Inverewe Garden, intended to engage the viewer to consider their sense of place.

Lynn also finds her body a perfect medium to express her artist context and has recently done a performance on Displacement which is an on-going project.

Living in a remote rural area, Lynn has learned to adapt and create opportunities for herself and the area she lives in.  She is open to new ideas and is always looking to expand her boundaries in her field of interest of people and place.  She connects with the issues of people and place globally and enjoys interacting with people and developing and understanding cutlures around the world. 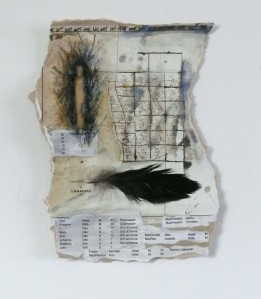 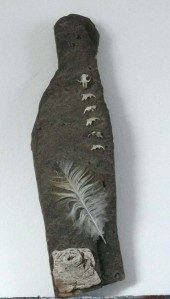 I have over the years done various works for illustration purposes including Visitscotland, wedding invitations and Two Lochs radio. I have been interviewed for several blogs online. Some of my works are on permanent show in Bridge Cottage Gallery, Poolewe , and I am a member of Highland Open Studios from 2007- present, An Talla Solais, Ullapool, Visual Arts Scotland 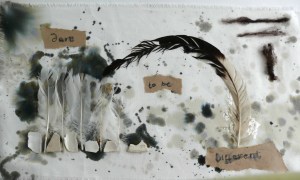